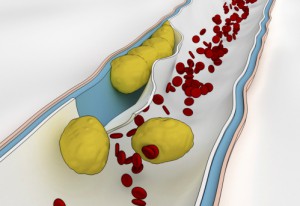 In Part 1 of our series on circulation, we discussed the mechanisms by which circulation is possible, in spite of the influence of gravity which attempts to prevent return of blood to the heart when we are in an upright posture. Let’s look at how vein disease affects blood circulation.

The most common cause of aching, swollen, tired legs is vein disease. Vein disease refers to a condition of abnormal vein function which results in an impairment of the veins’ ability to return blood to the heart.

The abnormality most commonly associated with vein disease is malfunction of the vein’s one-way valves which prevent blood from flowing backward toward the ground. Over time, the force of gravity pushing the columns of blood in your lower extremity veins will begin to breakdown the thin valves in the veins, eventually rendering them incompetent.

Obviously, the older we get, the longer gravity has had to put pressure on these valves. In fact, if all humans could live to be 250 years old, it is almost a certainty that all humans would develop vein disease because the constant force of gravity would eventually break down all vein valves that prevent blood from flowing backwards. This is the reason that most of my patients are in the older age groups—its simple—gravity has had a longer time to work on de their vein valves. So it appears that most vein disease is due to gravity and genetics, in other words how tough are your veins and how much time has gravity had to work on your veins.

So now what happens when the valves start to breakdown? The first thing that happens is that the pressure in the vein segments where the malfunctioning valves are present goes up. Over time, as the pressure mounts, a whole series of bad things begins to happen: pain, aching, swelling, itching, fatigue, discoloration, blood clots, and ulceration-to name just a few.

It is incumbent on the vein doctor to recognize when this pressure is due to causes other than primary vein disease and to refer the patient to the proper specialist to address these issues.

Dr. Robert Ruess specializes in the modern treatment of venous disorders. His Five Star Vein Institute has offices located in Las Vegas and Mesquite Nevada. Call today to schedule an appointment with Dr. Ruess to discuss your vein health.